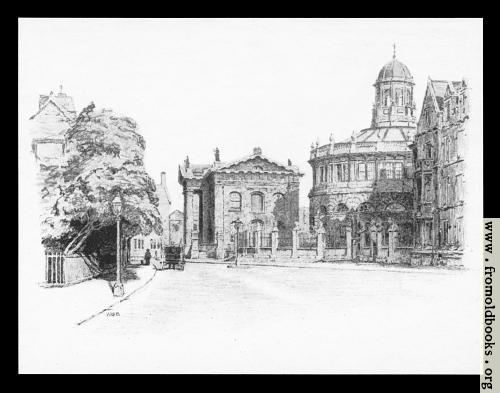 The east side of the University buildings proper was shown in the last picture (Plate IV [sic]); in the present one the north side of the same block is seen. The old University “schools” lay just inside the city wall, and Broad Street, which is here represented, occupies the site of the ditch, which ran on the north of the wall. This picture is a fitting supplement to the last, for the Sheldonian Theatre on the rightof it and the Clarendon Building in the background ay claim rank even with the Bodleian and the Radcliffe as the University’s special buildings.

The Sheldonian celebrated its two hundred and fiftieth anniversary only last year (1919), when the music which had been performed at its opening was performed once more. It is a building interesting from many points of view. Architecturally it marks the first complete flowering of the genius of Sir Christopher Wren. He was only thirty-seven when it was completed, and had been previously known as a man of science rather than as an architect; he ws Oxford’s Professor of Astronomy; but Archbishop Sheldon chose him to build a worthy meeting-place for his University, even at the same time he was being called by the king to prepare plans for rebuilding London after the Great Fire.” (p. 21)

Liam’s snapshots from a trip to Oxford