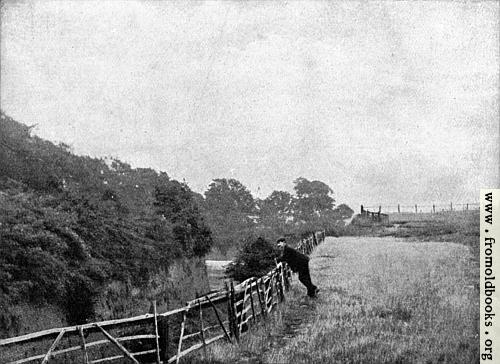 The playground of Dickens in his childhood, and the scene of the duel (which never took place!) in Pickwick

(By permission of Messrs. A. and C. Black)

“The happiest days of Dickens’s childhood were spent at Chatham, where he went to live when he was four. The principal productions of this town and its vicinity, according to Pickwick, were “soldiers, sailors, Jews, chalk, shrimps, officers, and dockyard men,’; a description which still holds good. The vivid impressions of Chatham that were received by the timid and susceptible little boy are reproduced in the immortal Pickwick Papers.

We give a picture of the field adjacent to Fort Pitt, the scene of the duel (which did not take place!) between the bellicose Dr. Slammer and Mr. Winkle, who was on this occasion, as not infrequently, in a tremendous “funk.”

The Chatham days were full of delight for Dickens. He enjoyed many a ramble with his sister and nurse in the fields about Fort Pitt; “the sky was so blue, the sun was so bright, the water was so sparkling, the leaves were so green, the flowers were so lovely, and they heard such singing-birds and saw so many butterflies that everything was beautiful.” It was a great mercy that the young child was granted these six happy years at Chatham, for from the time that he left it at the age of ten until he had entered on manhood, he endured much misery, privation, and suffering.” (pp. 458 – 9)

The book doesn’t identify the man leaning on the fence in the picture.