The Blizzard in America; Dead Boy in the Snowdetails 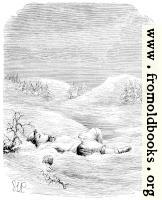 The Blizzard in America; Dead Boy in the Snow more

The Blizzard in America; Dead Boy in the Snow

The engraving shows a bly lying face up in teh snow, partly covered by it; from the accompanying text we know he is dead:

Lost in the Snow: The Blizzard in America

All hearts have been touched by the terrible accounts of the recent Blizzard in America. The lives lost in Dakota, Minnesota, Nebraska, Iowa, Montana, Wisconsin, and Colorado numbered fully two hundred.

The Blizzard begins suddenly, the wind increases in fury, the snow falls thickly, and is hurled along in blinding clouds, making the air almost dark. A man’s voice, we are told, could not be heard six feet distant. Many dear children, returning from school, were overwhelmed and frozen in the drifts. Two, a boy and a girl, were found lying close together. The boy had his sister’s hands between his own—the last grasp, the grasp of loving affection: “in death they were not divided.” In another case a faithful teacher was found crouched in a little hollow in the ground, with her arms about a little girl, around whom she had wrapped her dress. There was a smile on her face—a sweet token of peace in her last ministry of love.

May we not believe that many of those thus suddenly called realized the Divine Presence in the storm, so touchingly described in Mr. Wilton’s poem (Page 71)?

“Over the drift He stoops

And lights with it the sweetness of His Face,

And clasps each blossom, where in death it droops,