Hark! the sea is crying to me in pain!details 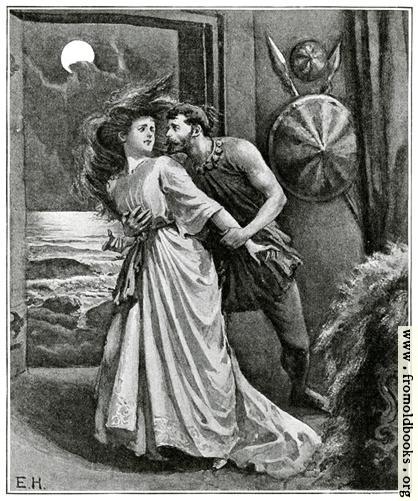 Hark! the sea is crying to me in pain! more

Hark! the sea is crying to me in pain!

Thus the two lived on, each for the other, in one long summertime, lit by their great love. The nights grew long; day after day the sea fought fiercely with the cruel winds that broke its rest. and the frost grew keen, yet for Harals and Hledis [there] was no winter. (p. 459)

Harald is a young man, in the fullness of his strength, and his Viking shield and spears are on the wall. He loves a woman who is fey, drawn to the sea, and in the storm in the moonlight she awakens from her sleep. But Harald comforts her and kisses her, and she sleeps once more.

The extract is from “The Seal Maiden” by Julian Corbett; the illustration is signed E. H.