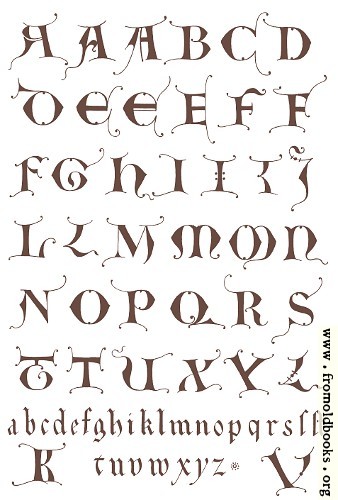 Almost a complete gothic (blackletter or old english) alphabet; I have supplied some rather grotesque monstrosities for “K” and ”V” at the foot of the page. The description in the book is a little confusing, because the scroll-work letters are on following plates; these on this plate, for the twelfth century lettering number 1, are printed in brown.

We now arrive at that graceful class of lettering, which, under a yet more perfect form, attained so such remarkable perfection during the 13th century. Our alphabets have been selected from the Harleian MSS., No. 2,800, which contains in three large folio volumes a series of lives of Saints for the whole year. The volume formerly belonged to the Monastery of St. Mary and St. Nicholas, at Arnstein, in the diocese of Treva. The initial letters throughout are for the most part executed in red, with the grounds of the scroll-work, of which they are composed, filled in with light blue and green, after the usual German manner of the 12th century. The drawing of the altogether conventional foliage is good throughout the whole work, which is ascribed by Sir Frederic Madden to “about the year 1190.” (p. 100)