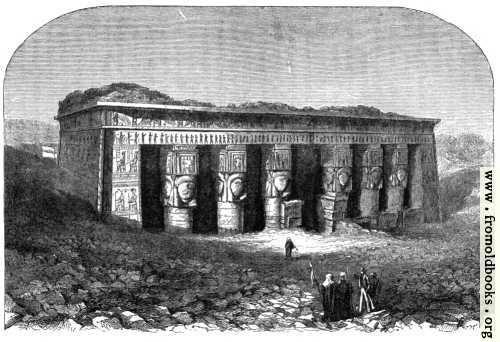 It is more modern and better preserved, though less interesting, than the Memnonium. Its construction was begun by one of the Ptolemies, two hundred and fifty years before the Christian era, and was completed under the Emperor Tiberius, while our Saviour was yet living in jerusalem. Some of its decorations were added in the reign of Nero. It has thus happened thta, though it does not combine the profane with any thing sacred, it does combine illustrations of different profane systems. It combines the history, mythology, and science, of ancient Egypt. it is elaborate equally in design and execution. We can hardly count its halls and chambers. the walls, the ceilings, the columns, the doors, the windows, the capitals, the surbases and pedastals, and even the staircases, are crowded with texts and bass-reliefs. These have such a natural correspondence that the antiquary finds it not difficult to penetrate their meaning, and even the ceremonies of worship. The temple was designed as a hall in which to celebrate the inauguration of the sovereign of Egypt in three characters, as King of Upper Egypt, King of Lower Egypt, and chief pontiff in the worship of Isis. The ceremonies consisted in stately processions, sacrifices, prayers, and offerings. [...] (p. 575)

Signed Richardson, So.; the signature is backwards, although since the reproduction is not photographic, I doubt this is an error.