The cover of the book is red and black with gold foil. [$]


The text (in German) reads as follows, as best as I can make it out; corrections and an English translation would be very welcome: [more...] [$]


A damsel in distress if ever the was one! The woman (Andromeda) is chained at wrist and ankle to a rock in the sea, and a viscious sea-monster is about to swaller her up. But look! The helmeted and sandal-footed Perseus is [...] [more...] [$]

Chapterhead with urns and winged lions


This chapterhead piece features winged lions (griffins, or gryphons), leaves and vines, and a central device that might be suggestive of a Medusa figure. It was used at the [...] [more...] [$] 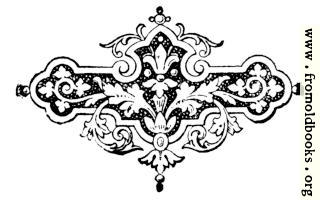 
This typographic decoration was printed as a tail-piece at the end of a chapter. The stippled white dots on a black background are called a criblé effect; this style was popular in the sixteenth century, and it’s possible that the wood-engraving for this ornament was old, although more likely it’s a nineteenth-century German copy. It has vine leaves and a [...] [more...] [$]


The mighty hero Herakles (Hercules) is about to slay the Hydra. He appears to be barefoot and naked, but there is a lion-skin cloak on his back part of which conceals [...] [more...] [$] 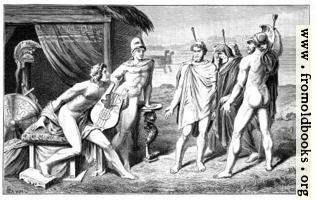 
Achilles and the envoys of the Greeks engraved by M. Laemmel (?) after Jean August Dominique Ingres. [$] 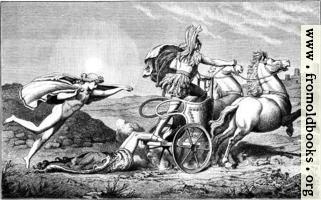 
Hector tried to tire [Achilles] by running around the walls of Troy with Achilles in hot pursuit. He caught him on the third lap around and killed him. He then took his armor, tied the corpse behind his chariot and dragged him behind it around the walls of Troy. Even after he buried Patroclus and sacrificed many, many animals to him, he still dragged [...]Characters of Greek Mythology, established by Tonya James] [more...] [$] 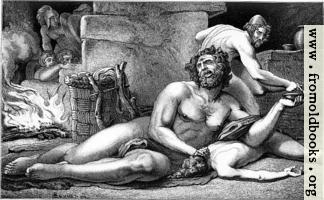 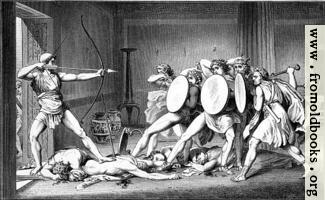