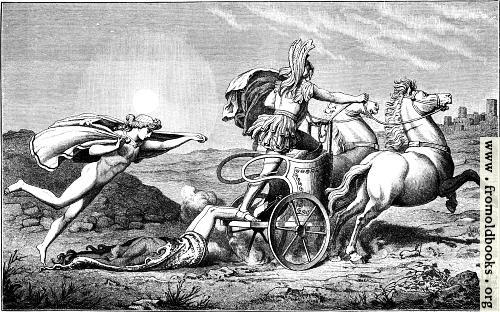 Hector tried to tire [Achilles] by running around the walls of Troy with Achilles in hot pursuit. He caught him on the third lap around and killed him. He then took his armor, tied the corpse behind his chariot and dragged him behind it around the walls of Troy. Even after he buried Patroclus and sacrificed many, many animals to him, he still dragged Hector’s body behind his chariot. Finally, Hermes and Apollo insisted that he allow Priam to give him ransom for his son’s mangled body. He offered Hector’s weight in gold, but Achilles clearly wanted Polyxena. Priam didn’t want to give in, and told him the only way that would happen is if he convinced the Greeks to leave without Helen, but went ahead and paid him the gold as a temporary measure.” [Characters of Greek Mythology, established by Tonya James]