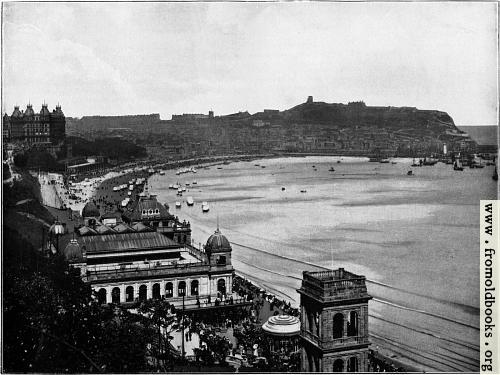 A fairly crowded beach even by modern standards, with Victorian bathing machines.

From a Photo. by Poulton & Son.

This has been called the “Queen of English Watering-Places,” and is at least unrivalled on the eastern coast of England. Spread out like an amphitheatre upon a bay and promontory looking over the German ocean, its houses rise tier behind tier away from the sea. Scarborough is sheltered on the north-east by a precipitous rock, near the top of which is a level space of about nineteen acres, on which stands the Castle of Scarborough, the most prominent feature from the sea. This castle dates from the Anglo-Norman period; the ground on which it stands is nearly 300ft. above the sea, which washes it on the north-east and south sides. It is only accessible on the steep slope of the west side.” (p. 1)