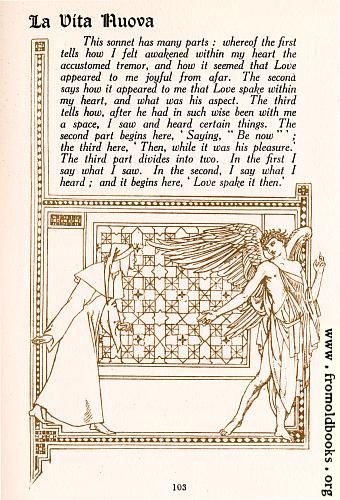 Full page image. In the decoration, the angel, presumably representing love, is beckoning towards the writer. The text reads as follows:

This sonnet has many parts: whereof the first tells how I felt awakened within my heart the accustomed tremor, and how it seemed that Love appeared to me joyful from afar. The second says how it appeared to me that Love spake within my heart, and what was his aspect. The third tells how, after he had in such wise been with me a space, I saw and heard certain things. The second part begins here, ‘Saying, “Be now” ’; the third here, ‘Then, while it was his pleasure.’ The third part divides into two. In the first I say what I saw. In the second, I say what I heard; and it begins here, ‘Love spake it then.’

I have made the decoration available separately, as the next image.