74.—The Siege of a Castledetails 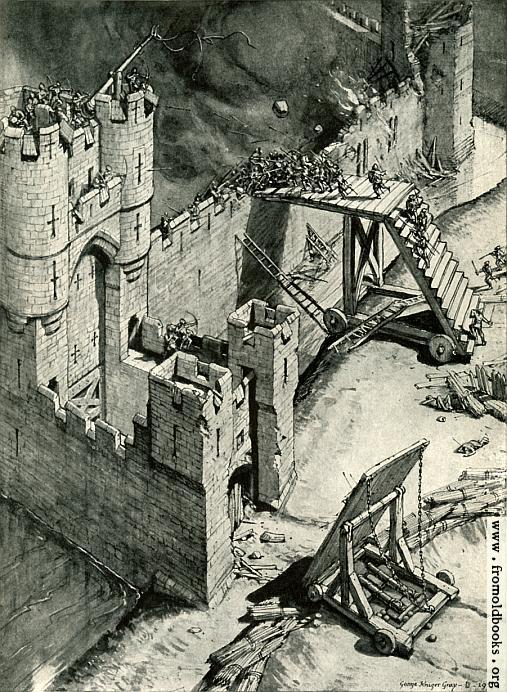 74.—The Siege of a Castle more

Hartlet, Dorothy and Elliot, Margaret M.: “Life and Work of the People of England: The Fourteenth Century” (1929)

copyright registered to Dorothy Hartley and Margaret M. Elliot
Please do not redistribute without permission, since running this site is expensive.

A hand-to-hand fight on a scaling ladder thrown against the battlements; the garrison hurl stones from a catapult. Note primitive cannon.
Reconstructional drawing from various sources by George Kruger Gray.”

George Kruger Gray died in 1943, so his work on this picture will remain copyright until the end of 2013.

“Attackers could head straight for gates or vulnerable points under movable covers, or erect scaffoldings (p. 74) to bring them above the level of the castle walls—another reason for clearing the castle district of available timber. But though castles could thus be taken by force or strategy, this century [14th] saw the inset of siege warfare which finally reached such extraordinary lengths.” (p. 79)