The engraving was taken from life and shows Francis Peck standing, holding some of his own books, and wearing perhaps an academic gown. The inscription [...] [more...] [$] 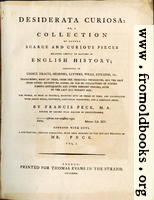 
The title page from this collection of random fascinating articles by Fracis Peck in 1779. I have left it in colour to give a feel for the yellowed paper. The book is over twelve by nine inches in size and two inches thick and the title page presents a solid mass of text in a fashion common in the eighteenth century, at least in England. It was an early [...] [more...] [$] 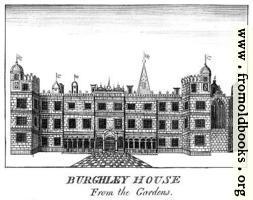 Burghley House from the Gardens


A spectacularly beautiful Elizabethan house, Burghley was built by William Cecil, the Lord High Treasurer of Queen Elizabeth I., between 1555 and 1587; William Cecil’s [...] [more...] [$] 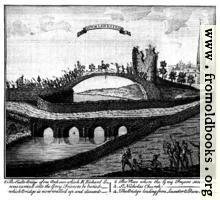 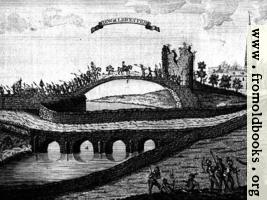 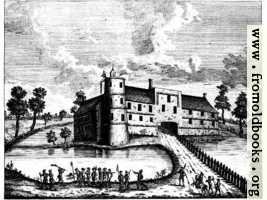 
See the main Woodcroft House plate for more information about this gruesome murder. [$] 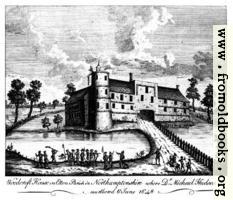 
It seems that Dr. Hudson had tried to hide in a tower, but was caught; he tried to escape, and ended up dangling over the edge of the tower by his hands. His hands (or fingers, accounts vary) were cut off, and he fell to the moat. he was fished out and killed. He had been imprisoned in the Tower of London and escaped here, where he had been writing [...]House of Lords Journal Vol. 10 (8th June 1648) reprints a letter from Col. Wayte, that he has suppressed an Insurrection in Rutland, Lincolnshire, &c., and names this Dr. Michael Hudson (of Market Bosworth in Leicestershire) as one of the insurgents. This was during the English Civil War. [more...] [$]