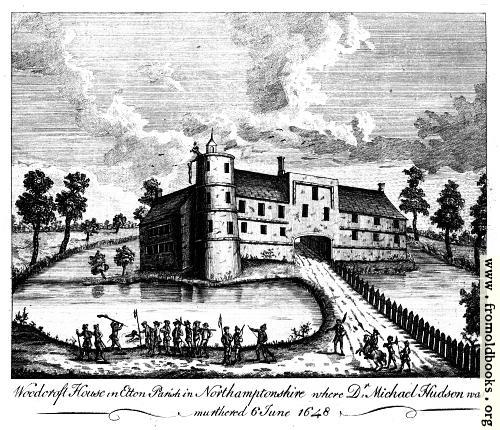 It seems that Dr. Hudson had tried to hide in a tower, but was caught; he tried to escape, and ended up dangling over the edge of the tower by his hands. His hands (or fingers, accounts vary) were cut off, and he fell to the moat. he was fished out and killed. He had been imprisoned in the Tower of London and escaped here, where he had been writing what were then considered seditious books, such as “The Divine Right of Government.” The House of Lords Journal Vol. 10 (8th June 1648) reprints a letter from Col. Wayte, that he has suppressed an Insurrection in Rutland, Lincolnshire, &c., and names this Dr. Michael Hudson (of Market Bosworth in Leicestershire) as one of the insurgents. This was during the English Civil War.

There is also a wallpaper version suitable for use as a computer screen desktop background, although not perhaps for the squeamish.

The size given here is for the main part of the picture, not including the caption, which was engraved as part of the plate. There is no indication of who drew or engraved the plate.

Etton is now (2010) in Cambridgeshire; thank you to Robert Penhey for pointing this out, and for correcting errors in the transcription.