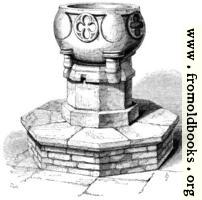 Is a strong and massive Early English Font. The bowl is cupshaped, and supported on an octagonal shaft of nearly equal dimensions. It is ornamented with eight circles, slightly raised, four of which are plain and four contain quatrefoils; under each of the plain ones is a very short shaft with moulded capitals, connecting the bowl with its support. The design and execution of the whole are very plain and simple, but characteristic of the period. It stands between the second and third pillar, on the south side [of] the nave, nearly opposite the south door.

The Church of All Saints and Saint James at Kings Cliffe