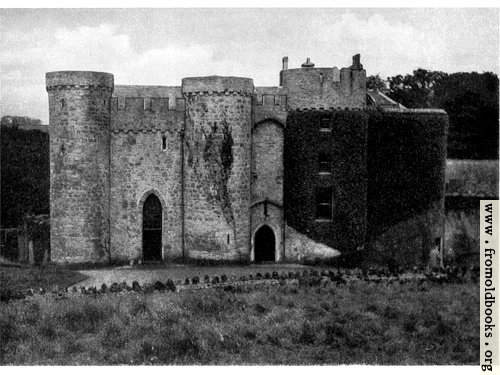 Situated on a narrow creek running up from Milford Haven—quite a separate one from that on which Carew lies, but only two and a half miles from that great castle, is a smaller stronghold, very typical of the solid style of building by which the minor lords of “Little England beyond Wales” maintained their hold on the land. This is Upton, the patrimonry of the Malefaunts, one of the many knightly families who were vassals of the Earls of Pembroke. It shows a particularly fine and perfect example of a thirteenth-century fate-house, with thwo low but strong drum-towers, and a battlemented and machicolated front between them. The narrow and acutely pointed doorway arch had a portcullis, and, no doubt, a drawbridge over a ditch, which has now been filled up. (p. 208)

Today Upton Castle seems to be best-known for its gardens.