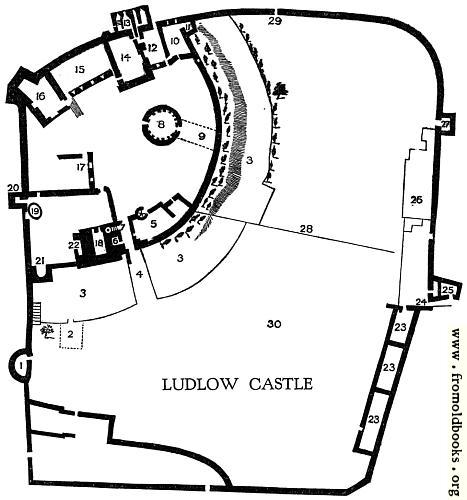 This is by far the most important castle of the whole Welsh border, surpassing Chepstow in size and Raglan in historic interest.” (p. 135)

The site is mentioned in the Domesday Book, and thus predates the Norman Conquest (1066), but the earliest existing castle buildings are probably entirely Norman, from before 1100 or so.

The caption to the plan reads as follows:

Description of the Plan

Ludlow Castle Web site with photographs, history, a virtual tour and other information.

‘Offices where the Fire Engines were kept.’
What were the fire engines? I’m assuming they’re different...

Actually I suspect that the castle was indeed used as a fire station.—Liam