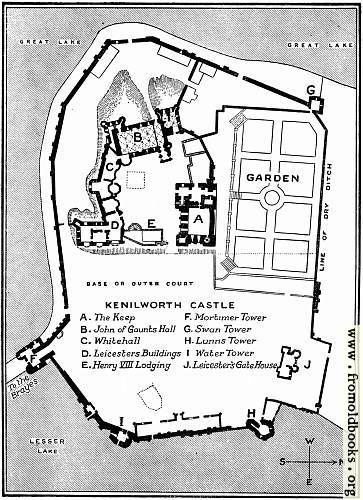 There has been a castle at this site since at least the first half of the 12th century, although the oldest of the present buildings could be as late as the 1260s according to Sir Charles Oman.

The plan of the castle shows the Great Lake to the West and South (the plan has North to the right, not the top), the Lesser Lake to the East, the line of dry ditch, and the gateway to the Brayes. In 1266 the lake was said to cover 111 acres, and was probably ordered to be made by Henry III. The Garden is shown against the North Wall of the Base or Outer Court, a good place since it will get most sunshine: a south-facing wall reflects the heat back to the plants, important in England’s cloudy climate!

A footnote on page 74 on the term Brayes reads: Cf. the term “Fausse-Braye” used by seventeenth and eighteenth century engineers for extra lower enceinte works placed round the foot of the main wall of a fortress. The word comes from the Latin braccæ.