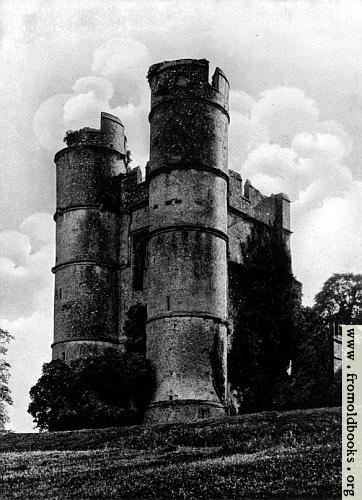 The Gate House
The gatehouse dates from 1386, when King Richard II granted Richard Abberbury the Elder the right to fortify ("crenellate") his manor.

There is also a plan of Donnington; use the Location links to find it.

“It would not be quite correct to say that in the whole county of Berkshire Windsor and Donnington are the only two places in which there is the least remnant of the masonry of a mediæval castle standing above ground. For though this would be true enough concerning the castles of Reading and Faringdon and Newbury, and Beaumyss (as we have seen) some fragmentary blocks survive from the inner stonework of Wallingford. But they are a negligible quantity, while at Donnington, though the castle is mutilated, one very large and imposing section of it remains almost intact, and is well worthy of a visit.

The manor of Donnington, one mile to the north of Newbury town, belonged in the fourteenth century to the family of the Abberburys; and in the year 1385, Sir Richard—last male of that house—got his “licence to crenellate” from Richard II. He built a castle on a well-marked eminence above the stream of the Lambourne, choosing a knoll on the highest part of the hill as his site, and adapting the shape of the building to the contour of the knoll; it was, therefore, not square, like the almost contemporary castles of Oxfordshire—Broughton and Shirburn—but roughly pentagonal. Its main distinctive feature was that its lofty and disproportionately large gate-house formed the strong point of the whole—there was no other keep, and the circular corner-towers were small. This great gate-house has in front two very tall drum-towers, slightly tapering toward their summits, and ringed round for decoration with five well-marked string-courses, the third and fourth of which show at intervals curious grotesque heads. Between the drum-towers is a portcullis-chamber with a handsome window above it. This forms the front of a square battlemented building, much lower than the two drum-towers which rise above. The whole gate-house projects greatly from the bulk of the pentagonal castle, its back only being in line with the rest of the walls. It is so complete that its lower stories are used for a dwelling house, a modern cottage front having been built on to the back of it. Of the rest of the castle there is nothing but a ground plan on the hill-top discoverable; at no point is the masonry more than two or three feet high. But we can trace small corner towers at four of the angles, and small square mural towers set in the curtain between these corner towers, and the ditch outside is still well marked.

Sir Richard Abberbury, being old and childless, sold Donnington, in 1415, to Thomas Chaucer, sometime Speaker of the House of Commons, the pushing and capable son of Geoffrey the Poet. Thomas made it over to Sir John Phellip, as the dowry of his daughter Alice, having probably purchased it for that special purpose. But Phellip died childless, only one year later, and his widow—Still quite a young woman—married in succession two great peers, Thomas Montague, Earl of Salisbury (circ. 1425) and William de la Pole, Earl of Suffolk (circ. 1430). Alice Phellip was an heiress of considerable wealth, as she owned not only Donnington, but the manors of Ewelme and Hook Norton, and other lands, which came to her at her father’s death. She was most unlucky in her husbands—Phellip died young: Salisbury was slain by a cannon ball at the siege of Orleans (Nov. 3, 1428) just in time to escape a contest with Joan of Arc. By neither of them did Alice have issue. Suffolk was the unlucky minister of Henry VI., who incurred much ignominy and hatred as the advocate of a “peace at any price” with France. His master gave him a dukedom, but could not save him in the day of his adversity—banished from the realm in 1450, he was murdered on the high seas by his political enemies. By this unfortunate and much maligned statesman Alice Chaucer had a family—a son and several daughters. The boy was only eight at his father’s death, and was for many years under the tutelage of the duchess, dwelling at Donnington and at Ewelme. Oddly enough—considering his father’s history—he became a resolute Yorkist when he grew up, and married Elizabeth Plantagenet, the sister of King Edward IV.

This was a grand marriage—a wonderful rise for the great-grandson of Geoffrey Chaucer, whose father had been but a vintner. But it brought in the end death and destruction to the house of de la Pole. For the children of Elizabeth Plantagenet were in the direct succession to the crown, when Richard III. had lost his only son, and had declared his two brothers’ issue illegitimate. In his last year Richard saluted Elizabeth’s eldest son John de la Pole as his destined heir—a fatal heritage when the House of Tudor came to the throne after Bosworth Field. The unlucky heir-presumptive died in arms against Henry VII, at the Battle of Stoke (1487), his brother Edmund, attainted on very doubtful evidence, was nineteen years a prisoner in the Tower, and finally was beheaded. The only surviving male of the house, Richard de la Pole, whom obstinate Yorkists called the “last flower of the White Rose,” lived long years in exile, and died at the Battle of Pavia in 1525, fighting for a foreign cause on Italian soil. Donnington had, of course, been confiscated to the crown on the attainder of Edmund de la Pole, and was given by Henry VIII. to his favourite and brother-in-law, Charles Brandon, on whom he also conferred the forfeited dukedom of Suffolk. The new duke, however, twenty years later (1535) exchanged Donnington with the crown for other lands, and the castle was a royal possession from 1535 to 1600, when Queen Elizabeth made a gift of it to the Earl of Northampton. The heirs of this nobleman alienated it not many years later, and by 1640 it was in the hands of a Mr. John Packer, a member of Parliament of Puritan tendencies.

This Mr. Packer must be reckoned a most unlucky man, for while he was a strong Parliamentarian, the Royalists seized his castle, which was in good order, and well furnished, and turned it into one of their strategical forts covering Oxford. Hence it was twice besieged by the owner’s friends, who ended by knocking it to pieces. The second battle of Newbury was fought all around and about it. Donnington was being besieged by a Parliamentary detachment, who had breached it and broken down three of its towers, when the king came out of Oxford with some 11,000 men and relieved it. An organized attempt was then made to crush him, by a general concentration of all the Parliamentary corps, consisting of the Eastern Association Army under the Earl of Manchester and Cromwell, and the wrecks of Waller’s and Essex’s recently defeated forces, with a brigade of London train-bands added. They numbered 19,000 men, but Charles (who was unaware of their great strength) offered battle (Oct. 27, 1644), holding Newbury town with his right, while his centre lay between the Lambourne and Kennet rivers, with the fortified mansion of Shaw House covering his left centre, and Donnington behind his left rear. The Parliamentarians, relying on their superior numbers, detached a large flanking column to turn the king’s left, consisting of the infantry of Essex’s army, and of Cromwell’s and Waller’s horse, while Manchester lay in front of the Royalist line, having promised to deliver the main attack when the flanking column should have come into action. But the combination miscarried—the turning force made too long a wheel, and appeared actually in the rear of Charles’s centre, instead of on his left wing. It got fiercely engaged with the king’s reserves, instead of attacking his flank, seized Speen Hill and then was gradually fought to a standstill. To the great disgust of Cromwell and Waller, Lord Manchester let the critical moment pass by, and only attacked the king’s centre a little before dusk, to be repulsed with loss while trying to storm Shaw House. Meanwhile parts of the Royalist reserve or rear line had sought shelter under the castle, and the guns of Donnington were firing into the flank of the Parliamentary detached force, and helping to bring it to a standstill. At nightfall the king, who had held out while the light lasted, in a most uncomfortable position between two hostile forces, slipped away toward Oxford, having first thrown his artillery and heavy baggage into Donnington. The battle was, in a sense, a defeat for both parties, rather than a victory for either.

While the Parliamentary generals were wrangling, Charles made an unexpected sortie from Oxford ten days later, and carried off the guns and baggage from Donnington, before the enemy could collect: from their cantonments in and about Newbury, and bring him to action. Colonel John Boys, who had defended his castle during the first siege, was knighted for his services, and justified his promotion by holding Donnington right down to the end of the war. It was again besieged in the spring of 1646, but held out till the news of the king’s surrender to the Scots came round. Sir John Boys then hauled down his flag, and handed over a castle so much battered that it took small trouble to complete its “slighting.” In 1647 it was an absolute ruin, save the gate-house, and so it remains to-day. Mr. Packer wisely resigned himself to living in a town-house in Westminster, for the short remainder of his days: he died in 1649.” (pp. 38 – 41)