1737.—Portraits of Poets At the time of Shakespearedetails 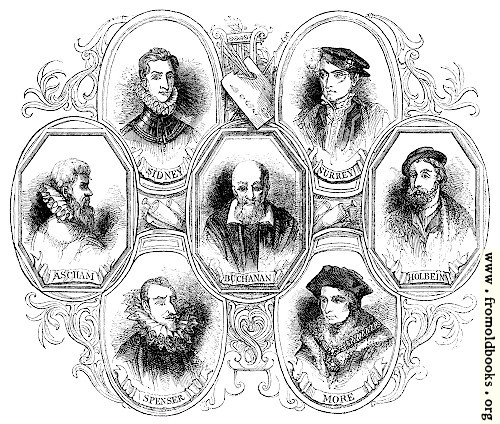 1737.—Portraits of Poets At the time of Shakespeare more

1737.—Portraits of Poets At the time of Shakespeare

A montage of eight portraits of famous sixteenth-century men who were poets. The portraits have individual oval frames and sometimes oxtangonal inner frames, and there are vines and perhaps acanthus leaves around the whoe ghastly thing. The people’s names are on fake scrolls under their faces.

Then there were the poets, some or other of whom were no doubt constantly to be found among the illustrius assemblage. Surrey (Fig. 1737), have before spoken, was of an earlier date so was Ascham (Fig. 1737), nor perhaps would it have comported with his grave but still genial character, or his position at the right hand of monarchs, to have visited the Mermaid or the Falcon, had he been alive; but there were Spenser (Figs. 1738, 1739), and Drayton (Fig. 1741), and Daniel (Fig. 1740), and the Water-Poet (Fig. 1743); above all, there was Herrick, one of the most delightful whenever he does not think proper to make himself one of the most disgusting of poets. He too has recorded, in his own way, in an epistle to Jonson, his impressions of these extraordinary meetings:—

Say how, or when,

Shall we thy guests,

at those lyric feasts,

Made at the Sun,

The Dog, the Triple Tun?

Where we such clusters had,

As made us nobly wild, not mad;

And yet each verse of thine

Or send to us

But teach us yet

Wisely to husband it,

lest we that talent spend;

And having one brought to an end

That precious stock, the store

Of such a wit the world should have no more.—Herrick.

George Buchanan is also mentioned on page 138 as having educated James VI. of Scotland when he was a boy.