1675.—North side of the Priory Cloisters, Christ’s Hospital.details 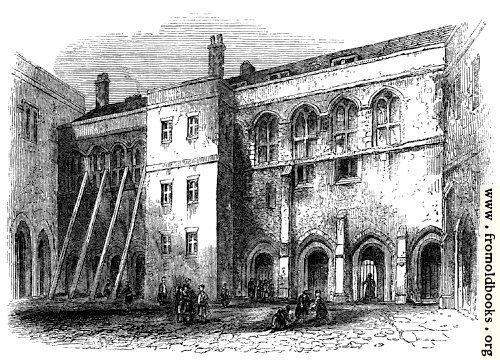 1675.—North side of the Priory Cloisters, Christ’s Hospital., in Horsham, Essex, England more

1675.—North side of the Priory Cloisters, Christ’s Hospital.

Christ’s Hospital is a charity-funded boarding school founded in the sixteenth century and still open today. It’s also known as the bluecoat school because of the school uniform

My father (Eric Quin) was a Christ’s Hospital pupil.

In the reign of Edward [Edward VI in th 16th century] the flat cap made its appearance (Fig. 1650), and gradually descending from grade to grade, becomes at last eternally popular, if not eternally worn, upon the heads of the bold ’prentices of London. The general dress of the citizens at that time is preserved for us to our own day [1845, but still true in 2018] in the garb of the blue coat boy of Christ’s Hospital. Stockings of silk first made their appearance in England about the same time. Their novelty amd value are shown very strikingly in the fact that Sir Thomas Gresham made a formal present of a pair to the youthful Edward. Elizabeth’s reign witnessed the existence of the first pair of English manufacture, as it did also the manufacture of worsted stockings. (p. 95)