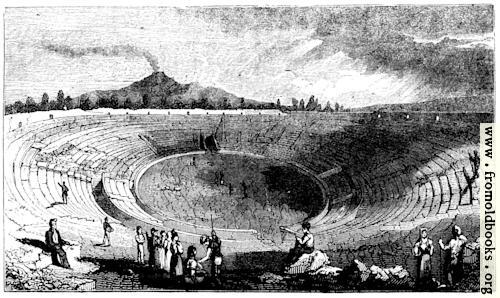 128.—Amphitheatre at Pompeii., in Pompeii,Campania,Italy more

This engraving shows, in poor perspective, a large circular amphitheatre. In the background we see Mount Ætna gently smoking, and in the foreground various people in Victorian costume disporting themselves high in the circle. In the centre ofth ring are some roughly-sketched figures of people.

The very perfect amphitheatre at Dorchester is much larger than that of Silchester, Stukeley having computed that it was capable of containing twenty-three thousand people. The form, however, of both ampliitheatres is precisely similar (Fig. 126). Their construction was different. The bank of the amphitheatre at Silchester is composed of clay and gravel; that at Dorchester of blocks of solid chalk.

These were rude structures compared with the amphitheatres of those provinces of Rome which had become completely Romanized. Where the vast buildings of this description were finished with architectural magnificence, the most luxurious accommodation was provided for all ranks of the people. Greece and Britain exhibit no remains of these grander amphitheatres, such as are found at Nismes and at Verona.

The amphitheatre of Pompeii, though of larger dimensions than the largest in England, Dorchester, appears to have been constructed upon nearly the same plan as that (Fig. 128.) Some bas-reliefs found at Pompeii indicate the nature of the amusements that once made the woods of Silchester ring with the howlings of infuriated beasts and the shouts of barbarous men (Fig. 127). (p. 42)