122.—The earliest figure of Britannia on a Roman coin.details 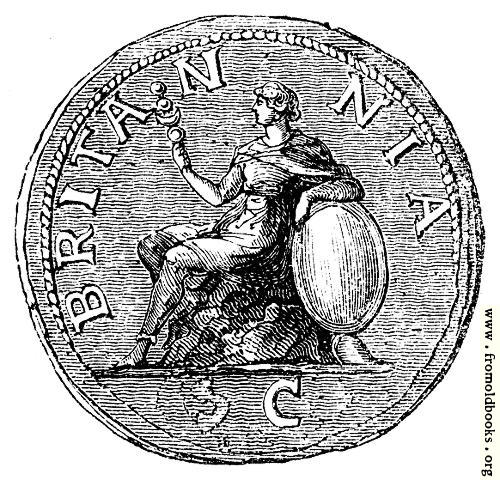 122.—The earliest figure of Britannia on a Roman coin. more

122.—The earliest figure of Britannia on a Roman coin.

Then came the terrible revolt of Boadicea or Bonduca,—a merciless rising, followed by a bloody revenge.

The Roman dominion in Britain nearly perished in this revolt. Partial tranquillity was secured, in subsequent years of mildness and forbearance towards the conquered tribes. Vespasian extended the conquests; Agricola completed them in South Britain. His possessions in Caledonia were, however, speedily lost. But the hardy people of the North were driven back in the reign of Antoninus Pius. Then first appeared on the Roman money the graceful figure of Britannia calmly resting on her shield (Fig. 122), which seventeen centuries afterwards has been made familiar to ourselves in the coined money of our own generation. (p. 38)

The English penny, until decialization in 1971, looked essentially the same as this coin.