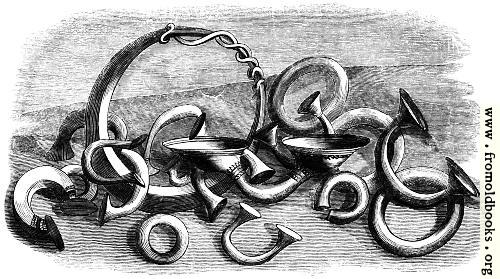 Ring-money, peculiar to the Celtic nations, undoubtedly existed in Ireland previous to the domination of the Romans in Britain. Although Cæsar says that the ancient Britons had no coined money, there is sufficient probability that they had their metal plates for purposes of currency, such being occasionally found in English barrows.

The Ring-money (Fig. 69) has been found in great quantities in Ireland, of bronze, of silver, and of gold. The rings vary in weight; but they are all exact multiples of a standard unit, showing that a uniform principle regulated their size, and that this was determined by their use as current coin.” (p. 22)