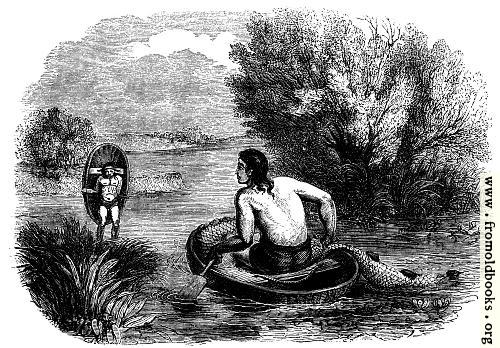 The primitive inhabitants of all sea-girt countries are fishermen. It is impossible not to believe that the people of Britain, having at their command the treasures of wide æstuaries and deep rivers, were fishermen to a large extent. The Britons must always have been a people who were familiar with the waters. The and the have still their coracles—little boats so peculiar in their construction that we may readily conceive them to belong to a remote antiquity. Gibson, the translator and best editor of Camden, has described these boats upon the Severn:

“The fishermen in these parts use a small thing called a coracle, in which one man being seated will row himself with incredible swiftness with one hand, whilst with the other he manages his net, angle, or other fishing tackle. It is of a form almost oval, made of split sally-twigs interwoven (willow-twigs), round at the bottom, and on that part which is next [to] the water it is covered with a horse-hide. It is about five feet in length and three in breadth, and is so light that, coming off the water, they take them upon their backs and carry them home.”

Such, we may conclude, were the fishing-boats of our primitive ancestors. (Fig. 58.) Some of the Roman writers might lead us to believe that the Britons had boats capable of distant navigation; but this is doubted by most careful inquirers.” (p. 22)

In this somewhat fanciful reconstruction, men wearing only shorts fish for what appear to be sea serpents.