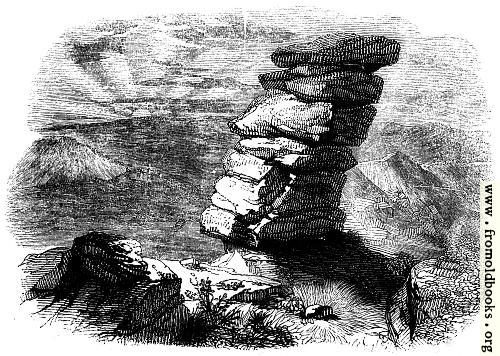 46.—Kilmarth Rocks, as seen from the South East., in Scotland more

46.—Kilmarth Rocks, as seen from the South East.

But there are some remains which have the appearance of works of art, which are, probably, nothing but irregular products of nature,—masses of stone thrown on a plane surface by some great convulsion, and wrought into fantastic shapes by agencies of dripping water and driving wind, which in the course of ages work as effectually in the changes of bodies as the chisel and the hammer. Such is probably the extraordinary pile of granite in Cornwall called the Cheesewring, a mass of eight stones rising to the height of thirty-two feet, whose name is derived from the form of an ancient cheese-press (Fig. 47). It is held, however, that some art may have been employed in clearing the base from circumjacent [sic] stones. Such is also a remarkable pile upon a lofty range called the Kilmarth Rocks, which is twenty-eight feet in height, and overhangs more than twelve feet towards the north (Fig. 46).” (p. 18)

I cound not find a modern reference to this rock formation.