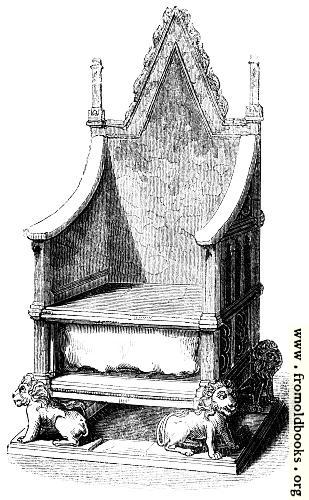 The celebrated stone which now forms the seat of the coronation chair of the sovereigns of England is a flat stone, nearly square. It formerly stood in Argyleshire, according to Buchanan; who also says that King Kenneth, in the ninth century, transferred it to Scone, and enclosed it in a wooden chair. The monkish tradition was, that it was the identical stone which formed Jacob’s pillow. The more credible legend of Scotland is, that it was the ancient inauguration-stone of the kings of Ireland. “This fatal stone was said to have been brought from Ireland by Fergus, the son of Eric, who led the Dalriads to the shores of Argyleshire. Its virtues are preserved in the celebrated leonine verse:—

Which may be rendered thus:—

“Unless the Fates are faithless found,

And Prophet’s voice be vain,

Where’er this monument be found

The Scottish race shall reign.”

Sir Walter Scott, in his graceful style, gives us this version of his country’s legend. The stone, as the youngest reader of English history knows, was removed to Westminster from Scone by Edward I.; and here it remains, as an old antiquarian has described it, “the ancientest respected monument in the world; for, although some others may be more antient as to duration, yet thus superstitiously regarded are they not.” (Fig. 45.) The antiquity of this stone is undoubted, however it may be questioned whether it be the same stone on which the ancient kings of Ireland were inaugurated on the hill of Tara. This tradition is a little shaken by the fact that stone of the same quality is not uncommon in Scotland. The history of its removal from Scone by Edward I. admits of no doubt. A record exists of the expenses attending its removal; and this is the best evidence of the reverence which attached to this rude seat of the ancient kings of Scotland, who standing on it in the sight of assembled thousands, had sworn to reverence the laws, and to do justice to the people.” (p. 19)

The Stone of Scone has been returned to Scotland, and now sits in Edinburgh Castle.