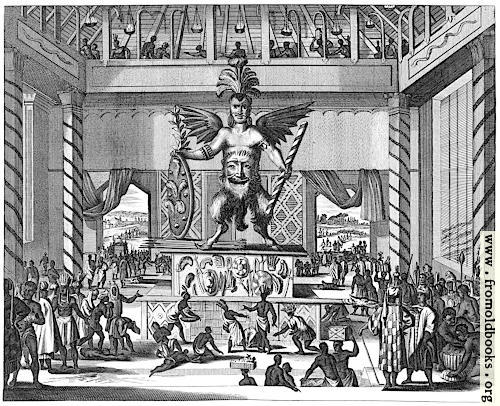 Vitzlipuztli, God of the Mexicans, in Mexico more

Vitzlipuztli, God of the Mexicans

The image is captioned, in Latin, Viztlipuztli idolum Mexicanorum, which is, Viztlipuztli, idol of the Mexicans. The usual modern spelling appears to be Vitzlipuztli; he/it was worhipped as a god or war and conquest. The description of Vitzlipuztli differs from that of Hiotzilopochtli, but they are often described as referring to the same god.

In the picture, Axtec Native American people worship before Viztlipuztli, Uiztlipuztli or Huitzilopochtli, a Mexican idol or statue, inside a large space, presumably a temple. The idol, shown as a devil with wings, a face on his stomach, and cloven hooves, stands on an altar decorated with military items such as spears, shields, and feathered headdresses. In one hand he holds a pole, in the other a shield with five feathers on it. Also includes animal headdresses and dark-skinned people (I think mostly male?) worshipping before the idol.

According to a catlogue entry at the John Carter Brown Library’s Archive of Early American Images, the text describes the statue as being seated on a litter painted blue with serpents’ heads at the end of the poles.