In this engraving from the title page, a two-faced woman uses a mirror to look safely at the medusa in the border of the picture. She is Prudence, trampling on Envy, a man with [...]Invidiæ Prudentia Victrix is Latin for, Prudence defeats envy, or, prudence is the victress of envy. [more...] [$]


This woodcut was at the start of a chapter. It features two mermen, I think, holding a shield bearing an armorial crest. [$] 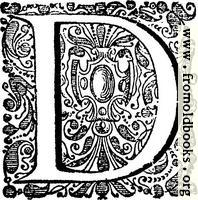 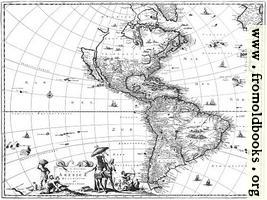 Map of the Americas 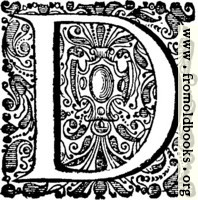 
Capital D, a decorative initial “D” used as a drop cap for the first paragraph of the text. [$] 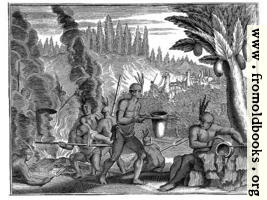 
Some naked and almost-naked people making chocolate. There are llamas in the background, and cocoa-trees e.g. on the right. [more...] [$] 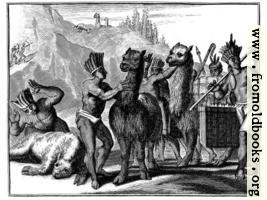 
Llamas are being used by natives clad in loin cloths or breech-cloths, as mounts and with panniers over their backs. In the background, naked men with bow and arrow are hunting llama on the mountains. [more...] [$]


Christopher Columbus, of Christofer, or Christofel Colonus as written here, was responsible for bringing many diseases to Turtle Island, including Catholicism and rampant individualism, corporate greed and measles, in a selfish pursuit of personal riches and fame He is famous in some parts of the world for “discovering” America, although since it [...] [more...] [$] 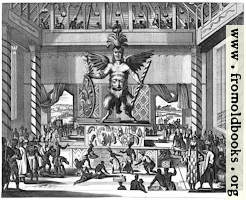 Vitzlipuztli, God of the Mexicans


The image is captioned, in Latin, Viztlipuztli idolum Mexicanorum, which is, Viztlipuztli, idol of the Mexicans. The usual modern spelling appears to be Vitzlipuztli; he/it was worhipped as a god or war and conquest. The description of Vitzlipuztli differs from that of Hiotzilopochtli, but [...] [more...] [$]