Frontispiece: Charles the King walked for the last time through the streets of Londondetails 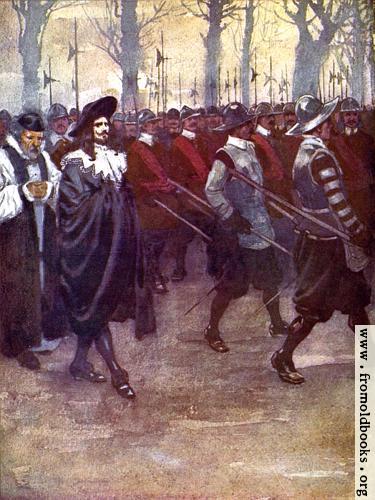 Frontispiece: Charles the King walked for the last time through the streets of London, in London, England more

Frontispiece: Charles the King walked for the last time through the streets of London

King Charles is followed by a priest, and surrounded by soldiers with lances. He wears 17th-century costume.

[King Charles I] had been foolish, he had been wicked, but now, in the face of death, he behaved with the dignity of a king. The men [of the court] who sat before him, he said, had no right to judge or condemn him. He would not plead for mercy. three times he was brought before the court, three times he refused to plead. At last the judges, without further trial, sentenced him to death as a “tyrant, a traitor a murderer, and a public enemy.”

Calm and dignified as ever, Charled walked out of the hall after the sentence had been pronounced.

“God bless your Majesty,” cried a soldier as he passed, and was struck by his officer for daring to say such words.

“Methinks,” said the King, pausing and smiling at the man, “the punishment is greater than the fault.”

Three days later Charles the King walked for the last time through the streets of London, from St. james’s Palace to Whitehall. The way was lined with soldiers, soldiers marched in front of him and behind him; the air was filled with the noise of trampling feet and the sound of drums.

The scaffold was raised outside the Palace of Whitehall, and hundreds of people crowded to see the dreadful end of their King, some in joy, ver many in grief and awe.