The White Knight Falls Off His Horsedetails 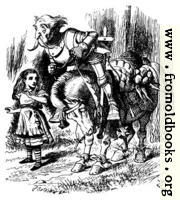 The White Knight Falls Off His Horse more

The White Knight Falls Off His Horse

“I hope you’ve got your hair well fastened on?” he continued, as they set off.

“Only in the usual way,” Alice said, smiling.

“That’s hardly enough,” he said, anxiously. “You see the wind is so very strong here. It’s as strong as soup.”

“Have you invented a plan for keeping the hair from being blown off?” Alice enquired.

“Not yet,” said the Knight. “But I’ve got a plan for keeping it from falling off.”

“First you take an upright stick,” said the Knight. “Then you make your hair creep up it, like a fruit-tree. Now the reason hair falls off is because it hangs down – things never fall upwards, you know. It’s a plan of my own invention. You may try it if you like.”

It didn’t sound a comfortable plan, Alice thought, and for a few minutes she walked on in silence, puzzling over the idea, and every now and then stopping to help the poor Knight, who certainly was not a good rider.

Whenever the horse stopped (which it did very often), he fell off in front; and, whenever it went on again (which it generally did rather suddenly), he fell off behind. Otherwise he kept on pretty well, except that he had a habit of now and then falling off sideways; and, as he generally did this on the side on which Alice was walking, she soon found that it was the best plan not to walk quite close to the horse.

“I’m afraid you’ve not had much practice in riding,” she ventured to say, as she was helping him up from his fifth tumble.

The Knight looked very much surprised, and a little offended at the remark. “What makes you say that?” he asked, as he scrambled back into the saddle, keeping hold of Alice’s hair with one hand, to save himself from falling over on the other side.

“Because people don’t fall off quite so often, when they’ve had much practice.”