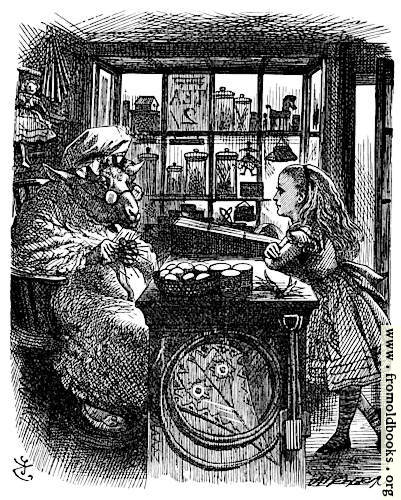 “Oh, much better!” cried the Queen, her voice rising to a squeak as she went on. “Much be-etter! Be-etter! Be-e-e-etter! Be-e-ehh!” The last word ended in a long bleat, so like a sheep that Alice quite started.

She looked at the Queen, who seemed to have suddenly wrapped herself up in wool. Alice rubbed her eyes, and looked again. She couldn’t make out what had happened at all. Was she in a shop? And was that really—was it really a sheep that was sitting on the other side of the counter? Rub as she would, she could make nothing more of it: she was in a little dark shop, leaning with her elbows on the counter, and opposite to her was an old Sheep, sitting in an arm-chair, knitting, and every now and then leaving off to look at her through a great pair of spectacles.

“What is it you want to buy?” the Sheep said at last, looking up for a moment from her knitting.

“I don’t quite know yet,” Alice said very gently. “I should like to look all round me first, if I might.”

“You may look in front of you, and on both sides, if you like,” said the Sheep; “but you can’t look all round you—unless you’ve got eyes at the back of your head.”

But these, as it happened, Alice had not got; so she contented herself with turning round, looking at the shelves as she came to them.

The shop seemed to be full of all manner of curious things—but the oddest part of it all was, that whenever she looked hard at any shelf, to make out exactly what it had on it, that particular shelf was always quite empty, though the others round it were crowded as full as they could hold.

“Things flow about so here?” she said at last in a plaintive tone, after she had spent a minute or so in vainly pursuing a large bright thing, that looked sometimes like a doll and sometimes like a work-box, and was always in the shelf next above the one she was looking at. “And this one is the most provoking of all—but I’ll tell you what——” she added, as a sudden thought struck her “I’ll follow it up to the very top shelf of all. It’ll puzzle it to go through the ceiling, I expect!”