Tweedledee and Tweedledum Prepare for Battledetails 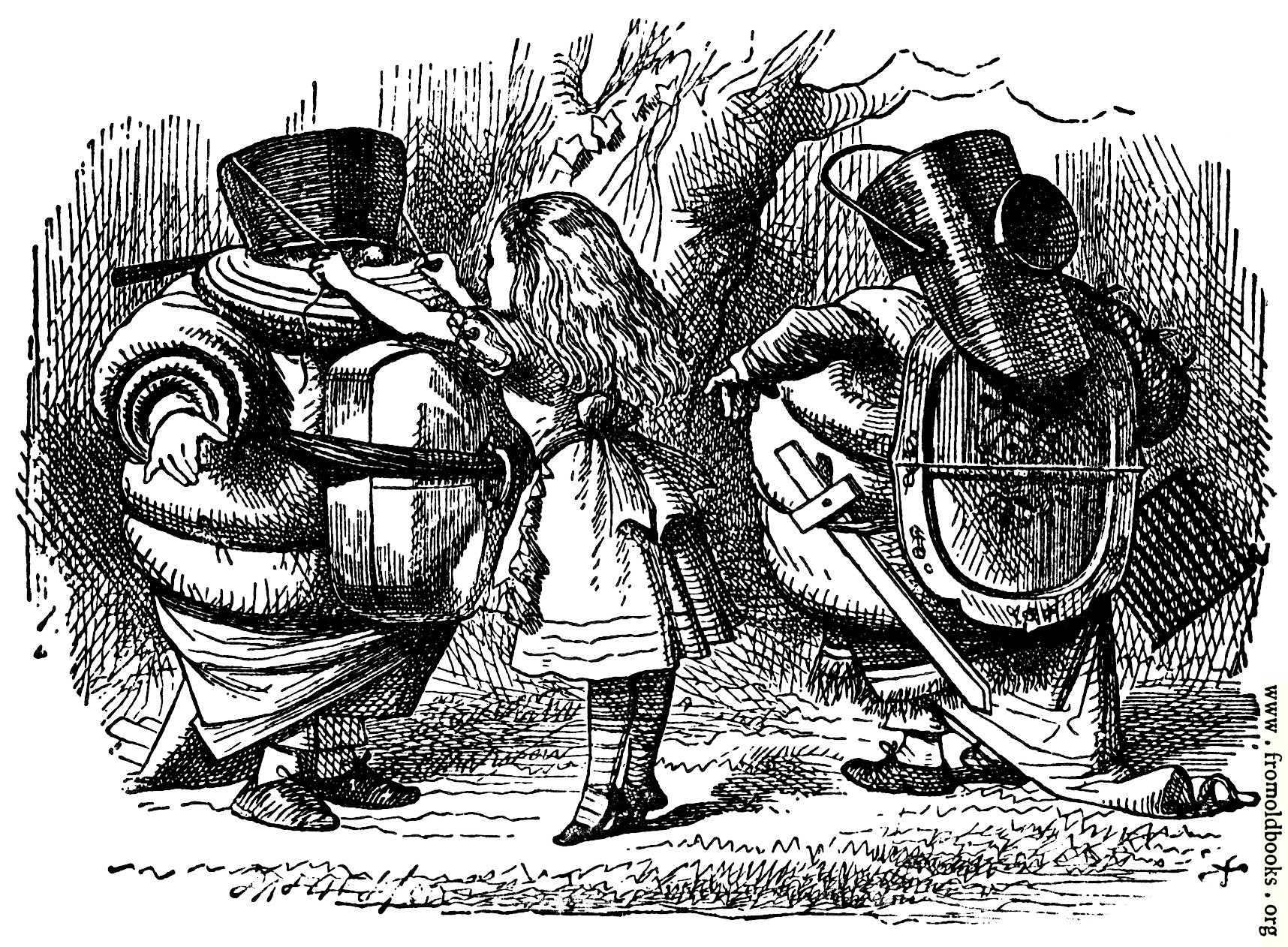 Tweedledee and Tweedledum Prepare for Battle

Here we see Tweedledee and Tweedledum, the two twin boys, standing on the edge of the forest (or in a clearing), so wrapped up with bolsters (a sort of long pillow) and sheets, one with a coal-scuttle on his hed as a helmet and the other with a saucepan, a tray as a shield, a wooden sword, and Alice in the meantime typing the saucepan in place.

The two boys carry on a genteel, English vicarage-garden sort of conversation about their fight:

“Of course you agree to have a battle?” Tweedledum said in a calmer tone.

“I suppose so,” the other sulkily replied, as he crawled out of the umbrella: “only she must help us to dress up, you know.”

So the two brothers went off hand-in-hand into the wood, and returned in a minute with their arms full of things— such as bolsters, blankets, hearth-rugs, table-cloths, dish-covers and coal-scuttles. “I hope you’re a good hand at pinning and tying strings?” Tweedledum remarked. “Every one of these things has got to go on, somehow or other.”

Alice said afterwards she had never seen such a fuss made about anything in all her life—the way those two bustled about—and the quantity of things they put on—and the trouble they gave her in tying strings and fastening buttons— “Really they’ll be more like bundles of old clothes than anything else, by the time they’re ready!” she said to herself, as he arranged a bolster round the neck of Tweedledee, “to keep his head from being cut off,” as he said.

“You know,” he added very gravely, “it’s one of the most serious things that can possibly happen to one in a battle— to get one’s head cut off.”

Alice laughed loud; but she managed to turn it into a cough, for fear of hurting his feelings.

“Do I look very pale?” said Tweedledum, coming up to have his helmet tied on. (He called it a helmet, though it certainly looked much more like a saucepan.)

“I’m very brave generally,” he went on in a low voice: “only to-day I happen to have a headache.”

“And I’ve got a toothache!’ said Tweedledee, who had overheard the remark. “I’m far worse off than you!”

“Then you’d better not fight to-day,” said Alice, thinking it a good opportunity to make peace.

“We must have a bit of a fight, but I don’t care about going on long,” said Tweedledum. “What’s the time now?”

Tweedledee looked at his watch, and said “Half-past four.”