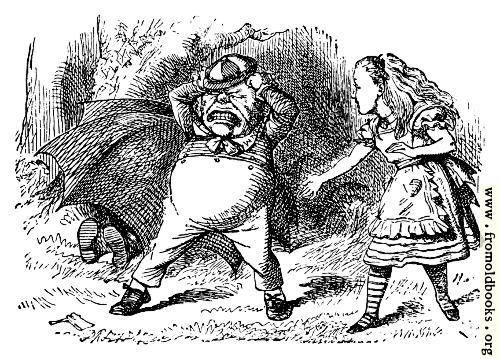 Alice and the Umbrella. more

Alice and the Umbrella.

“I know they ’re talking nonsense,” Alice thought to herself: “and it’s foolish to cry about it.” So she brushed away her tears, and went on as cheerfully as she could, “At any rate I’d better be getting out of the wood, for really it’s coming on very dark. Do you think it’s going to rain?”

Tweedledum spread a large umbrella over himself and his brother, and looked up into it.

“But it may rain outside?”

“It may—if it chooses,” said Tweedledee: “we’ve no objection. Contrariwise.”

“Selfish things!” thought Alice, and she was just going to say “Good-night” and leave them, when Tweedledum sprang out from under the umbrella, and seized her by the wrist.

“Do you see that?” he said, in a voice choking with passion, and his eyes grew large and yellow all in a moment, as he pointed with a trembling finger at a small white thing lying under the tree.

“It’s only a rattle,” Alice said, after a careful examination of the little white thing. “Not a rattle-snake, you know,” she added hastily, thinking that he was frightened: “only an old rattle—quite old and broken.”

“I knew it was!” cried Tweedledum, beginning to stamp about wildly and tear his hair. “It’s spoilt, of course!” Here he looked at Tweedledee, who immediately sat down on the ground, and tried to hide himself under the umbrella. (p. 85)