The gentleman offered his services, took her up in his arms, and carried her down the hill.details 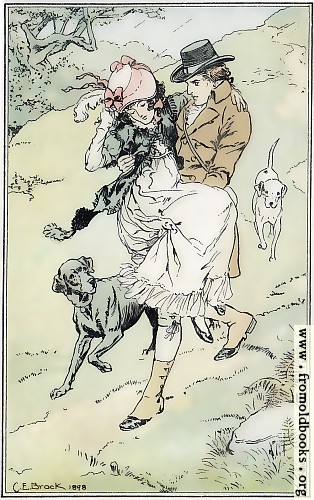 The gentleman offered his services, took her up in his arms, and carried her down the hill. more

The gentleman offered his services, took her up in his arms, and carried her down the hill.

A gentleman carrying a gun, with two pointers [dogs] playing round him, was passing up the hill and within a few yards of Marianne, when her accident happened. He put down his gun and ran to her assistance. She had raised herself from the ground, but her foot had been twisted in the fall, and she was scarcely able to stand. The gentleman offered his services, and perceiving that her modesty declined what her situation rendered necessary, took her up in his arms without farther delay, and carried her down the hill. Then passing through the garden, the gate of which had been left open by Margaret, he bore her directly into the house, whither Margaret was just arrived, and quitted not his hold till he had seated her in a chair in the parlour. (Sense and Sensibility Chapter 9)