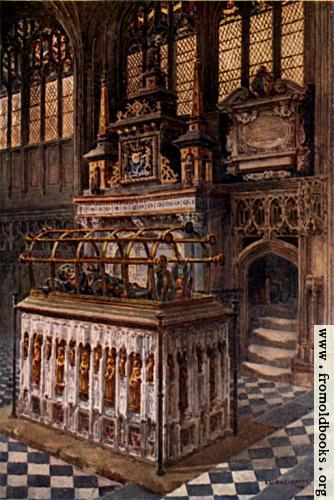 Tombs of the founder and Robert Dudley, Earl of Leicester

This tomb is (or was) in St. Mary’s Church, also known as Warwick High Church. George Morley writes (p.15) From the choir the silent mover in ‘the dim religious light’, as Milton calls it, of this splendid God’s House will pass to the Lady Chapel, or, as it is more commonly called, the Beauchamp Chapel. No one, being at Warwick, should ever miss seeing this ineffably beautiful example of pure Gothic. The ceiling of the chapel is of richly-carved stone, the floor of black and white marble, laid in the shape of lozenges. Here you may look upon the glorious altar tomb of Richard Beauchamp, the founder of the chapel; and just outside, on the north of the chapel, is the equally magnificent monument, of the altar kind, covering the bones of Robert Dudley, Earl of Leicester.