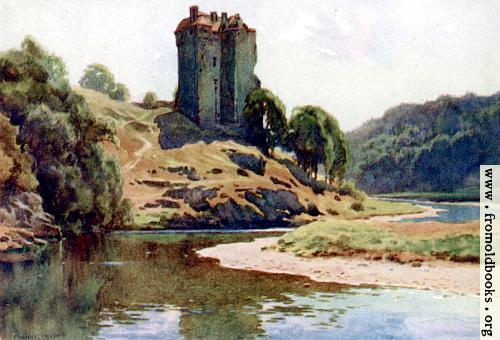 “A mile out of [Peebles], to the west, is Neidpath Castle, the most commandingly and romantically situated, and, in spite of the yawning gaps made in its walls by Cromwell’s cannon, the best-preserved—Traquair excepted—of the strongholds of the olden time on Tweed. The river is here constricted by the bare cairn-strewn ridge of Caidmuir—once Peebles Common—on the south, and by the Edston heights on the Neidpath side, and has cut a deep ravine through which has drained the great lake that once filled upper Tweeddale. The water swirls around rock and boulder below the castle base; and the screen of trees, whose destruction by that “degenerate Douglas”, Old Q., provoked Wordsworth’s indignant sonnet, has been partially restored. Access to the lofty thick walled double tower, still [1935] partly occupied, is by a gateway and courtyard; and over this outer portal are the arms of the early owners—the strawberries of the Frasers of Oliver Castle, from whom are descended the Frasers of the North; and the goat’s head of the Hays of Yester, who here entertained James VI, defied the Commonwealth, and were created Lords of Tweeddale.

Afterwards the castle and lands came into the possession of the Douglases of Queensberry, and they now [1935] belong to the Earl of Wemyss and March. From the window, now built up, over the arch, as has been sung by Scott and by Campbell, the dying “Maid of Neidpath” looked forth to watch the return of her undiscerning lover.

“Still discoverable is the casement in the Justice Room of the tower, out of which wrong-doers were hung after summary trial.” (pp. 61-3)