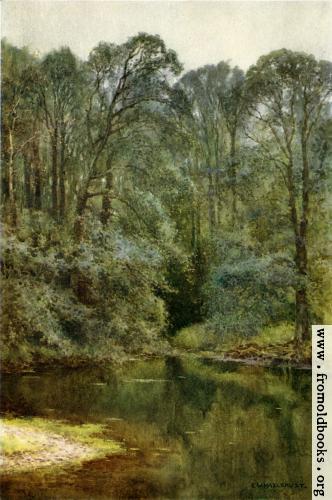 Cambridge is no city of spires. She lies belted with woods in the midst of a wide plain. To south, to west, to east stretches a lowland landscape, delicately moulded, rich in pasture and corn-bearing fields. Northwards a man need ride but a few miles across the fens to hear the bells of Ely, or at twilight to see the lantern of that ancient church preserve its solitary vision of the sun. Through this broad tract of country, whose every detail is typical of all which is most beautiful in the Eastern Midlands, winds that gentlest of English rivers, the Cam. Above Cambridge, it still bears its ancient name of Granta; at Ely it is the Ouse. The scenery along its upper reaches, though small in scale, is of singular merit to eyes which are not weary of “Nature’s old felicities.” Near Grantchester, a lock now marks an ancient bifurcation of the river, and here the stream widens to form a deep sequestered pool, shaded by a veritable arena of tall trees. Poet as well as peasant must often have bathed here and have made it a place of meditation. It was a favourite spot with Byron, and it is still called after him.” (P. 4)