22. Stokesay Castle. Window and Doorway of the Hall.details 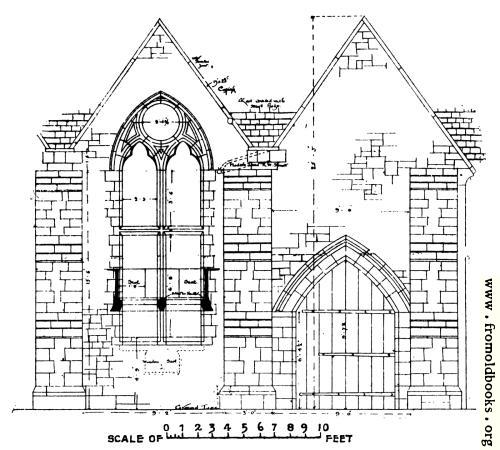 22. Stokesay Castle. Window and Doorway of the Hall., in Stokesay, Shropshire, England more

22. Stokesay Castle. Window and Doorway of the Hall.

“It must be borne in mind that hitherto windows had not been glazed. They were usually of small size for purposes of security, and no doubt their smallness was an advantage so far as the inlet of cold air was concerned.

But they rendered the rooms gloomy to the last degree, and the unlucky people of the time must often have had the choice of two evils, icy draughts, or the darkness which followed the closing of the shutters. No wonder the fireplaces were made large, yet even with a blazing fire in the middle of the hall, none of its heat being lost up the chimney, the plight of the household must have resembled that of travellers round a camp fire who complain of being rosted on one side and frozen on the other.

In the hall at Stokesay, however, the windows are large, and the lights are of such ample width as to offer but little protection against attack. They are two lights wide and two lights high, the upper ones being pointed and cusped, and surmounted by a circular eye (Fig. 22). This eys and the uper lights were glazed, but the lower ones were merely closed with shutters.

This amount of glazing is a decided advance in comfort, and so is the size of the windows, which must have rendered the hall quite a cheerful place, in striking contrast to the gloom of the tower [... see next image]” (pp 40, 41)