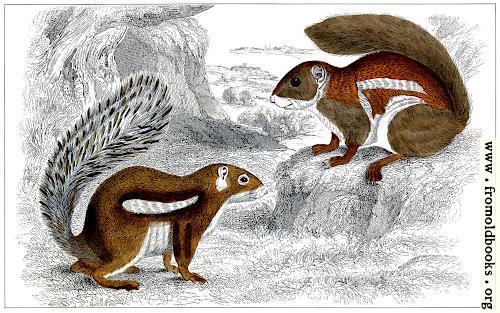 Goldsmith, Oliver: “A History of the Earth and Animated Nature” (1851)

The book doesn’t actually mention either of these two varieties of squirrel, and the Hottentot Squirrel seems unlikely to have retained that name today.

There are few readers that are not as well acquainted with the figure of a squirrel as that of the rabbit; but supposing it unknown to any, we might give them some idea of its form, by comparing it to a rabbit, with shorter ears, and a longer tail. The tail indeed, is alone sufficient to distinguish it from all otherss, as it is extremely long, beautiful, and busy, spreading like a fan, and which, when thrown up behind, covers the whole body. This serves the little animal for a double purpose; when erected, it serves, like an umbrella, as a secure protection from the injuries of the heat and cold; and when extended, it is very instrumental in promoting those vast leaps that the squirrel takes from tree to tree; nay, some assert that it answers still a third purpose, and when the squirrel takes the water, which is sometimes does upon a piece of back, that its tail serves it instead of a sail. (p. 431)