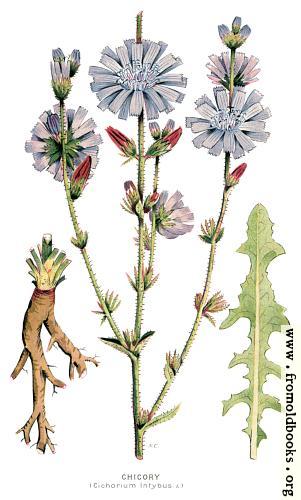 Introduced. Perennial from a long deep rootstock. Stems 2 to 3 feet high, branched, hairy below. Root leaves, closely resembling those of the Dandelion, 6 to 8 inches, spreading on the ground, runcinate pinnatifid or dentate; midribs hairy beneath; upper leaved glandular ciliate on the margins, clasping at base. Flower heads bright blue, nearly 2 inches across, composed entirely of strap-shaped flowers, usually closing by noon, in sessile clusters of three or four together along the almost leafless stems. Seeds [Plate 54, fig. 21—natural size and enlarged 8 times] ⅛ inch long, dark brown or straw-coloured, mottled with brown, wedge-shaped, obtusely 3 to 5-angled, some seeds being much curved; the surface is grooved and ridged from top to bottom and roughened crosswise with minute close raised and waved lines; at the topp, surrounding the apical scae, is a fringe of short flat white bristles.

Time of Flowering: July to frost; seeds ripe in August.

Propagation: By seeds or shoots from the roots.

Occurrence: Throughout Eastern Canada, most abundant in the Province of Quebec.

Imjury: A troublesome weed in rich low land and in pastures. Seeds often found among crop seeds, particularly of clovers and grasses.

Remedy: A short rotation of cropps, as for Canada Thistle. Chicory is not often seen in good farming districts except as a wayside weed.