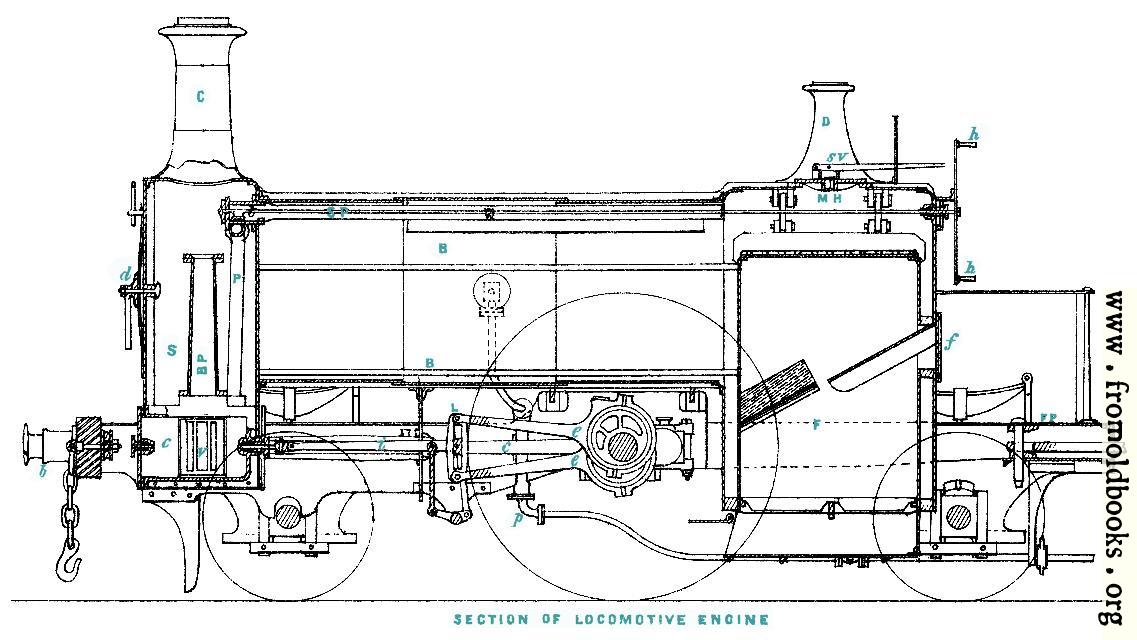 This is a version of Plate I in which I have coloured the letters blue, to try to make it easier to follow the description, which I have also repeated here:

In this sectional elevation F is the furnace, with f the furnace door; the furnace is seen surrounded by the outer fire box, but the screwed stays are omitted. Above and below B are the tubes running from the inner fire box to the smoke box, two only are shown; around the tubes and above them is the water; the level of the water is called the water line. Admission to the smoke box is gained by a door at d; this door is fitted as closely as possible to exclude all cold air. At the top of the smoke box S, is seen the chimney C, and within the smoke box is the waste steam pipe or blast pipe, B P. In this engine there is no steam dome. The steam pipe S P passes along the whole length of the boilder, a space being left for it between the roofing stays; its ends are secured by driving ferules tightly in. A large number of small holes are put in on the top side (see p. 254) to admit steam, and knock the water out of it. The regulator is at the end in the smoke box marked t. When it is opened, by the rod passing down the middle of the steam pipe, from h the steam goes down P to the cylinder. A rest for the regulator rod is shown in the middle of the steam pipe. In the plate [Plate I], the steam pipe stops short at the front end of the fire box, it should be carried on to the back end. The regulator being opened, the steam passes along S P down the smoke box by way of P to the cylinder C, and sets the piston reciprocating; thus the engine is worked. In our figure the handle of the regulator is at h, and the regulator itself at t in the smoke box, the handle of course being worked by the engineman, who stands on the foot-plate, FP, at the back of the furnace; the whistle is also close to his hands, whilst one of the safety valves, generally s v, is under his control, and the other he cannot interfere with. The large wheel in the middle is the driving wheel, turned by the crank, which is moved round by the connecting rod c, which is attached to the piston rod, the latter in its turn is firmly fixed to the piston. The front wheel next [to] the chimney is called the leading wheel, securely fixed on the leading axle, and the wheel to the right the trailing wheel.” (p. 240)