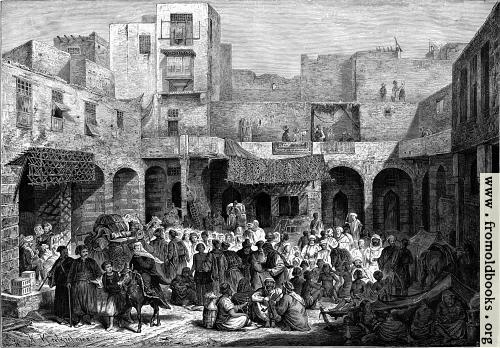 “I must mention, as one of the ex-Kedive’s best actions, the abolition of the slave trade, which was flourishing in Egypt only a short time since. Very few years have gone by since I myself was one of those who saw the court of an okella well supplied with the human commodity. I am only too glad to leave it to the artist to give a picture of the tragical scene, of which he was a spectator even before I myself was. At the present time [1870s] this scandalous trade can only be carried on in the profoundest secrecy, and the judges are bound to restore every male or female slave to liberty who claims the right. It is true that many of these poor wretches do not avail themselves of their rights, nor can it be denied that the lot of a slave under the influence of Mohammedanism may be regarded as comparatively an easy one. Any one who knows how completely the institution of slavery had grown to be part and parcel of Eastern life and customs will not refuse the due meed of praise to the man who seriously set to work to oppose it.” (pp. 35, 36).

The picture shows a courtyard full of people, many barefoot and some wearing only a loin-cloth. A plump and well-dressed man with a walking stick is accompanied by a barefooted youth leading a donkey or small horse on which sits a veiled lady. A group of bearded men with headdresses, cloaks and bare feet sit on the ground smoking long pipes. On the right a woman nurses a baby by a steaming pot. In the centre a youth wearing only shorts or a loin-cloth is being inspected; perhaps he is for sale. In the far background, however, at the right, a person, I think a man, his chest partly exposed, stands near another man who wears a hat or turban and holds a stick; the second man appears to be selling the first as a slave by auction. There are perhaps fifty or one hundred people in the scene overall.