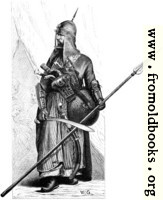 A Mameluke in Full Armour.


We have seen how deplorable was the condition of the country [1790s Egypt] at that time, drained by the greed of the Turkish Pacha and the Mameluke Beys; its [...] doubled, was reduced to two and a half millions of souls. [...] But the stormy attacks of the swift and splendid Mameluke cavalry were of no avail against the strategic genius of the Corsican and the solid strength of the French battalions. (p. 2) [more...] [$]


A boy, perhaps thirteen years old, has a large flower on his head and carries a garland; he is selling flowers from a basket. [$] 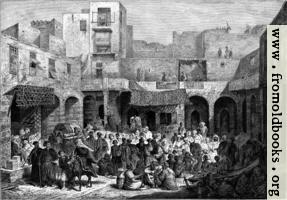 
“I must mention, as one of the ex-Kedive’s best actions, the abolition of the slave trade, which was flourishing in Egypt only a short time since. Very few years have gone by since I myself was one of those who saw the court of an okella well supplied with the human commodity. I am only too glad to leave it to the artist to give a picture of the tragical [...] themselves of their rights, nor can it be denied that the lot of a slave under the influence of Mohammedanism may be regarded as comparatively an easy one. Any one who knows how completely the institution of slavery had grown to be part and parcel of Eastern life and customs will not refuse the due meed of praise to the man who seriously set to work to oppose it.” (pp. 35, 36). [more...] [$]

Festival of the Pilgrimage


An ornate floral typographic border for a chapter heading. Such borders were usually made from lots of separate pieces of metal type, so that you could make the [...] [more...] [$] 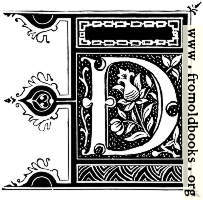 
A foliated (floriated) initial letter D used as a decorative 8-line drop cap at the start of a chapter. [$] 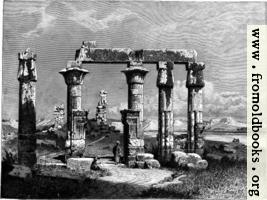 Colonnade of Medamot at Thebes


This temple (if such it was) seems mainly to be of interest to archaeologists because of its “Campaniform Capitals” or pillars with floral tops. To most other [...] [more...] [$]


Siout is an ancient city; the modern name is Asyut or Assiut; the ancient Greek name was Lycopolis. [more...] [$] 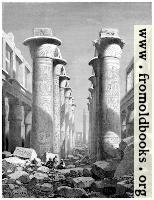 Great Hall of Pillars at Karnak.


This engraving shows the Hypostele Hall at the Temple of Karnak in Egypt. [more...] [$] 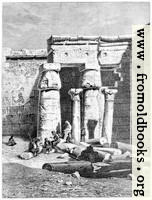 Court with Remains of a Christian Church at Medinet Haboo.


Among all temples on the western shore of the Nile, that of Medinet Haboo is distinguished by the grandeur and originality of its plan and the excellent preservation of its iportant parts. It was Rameses III. who erected this noble structure close to a small temple built by Thotmes III. (1. in the plan) in the south of the Nekropolis. [...] with much magnificence; and after the doctrines of Christianity had dethroned the old gods of Egypt, a Christian congregation established itself in its halls, and built a church in its courts. (p. 286) [more...] [$] 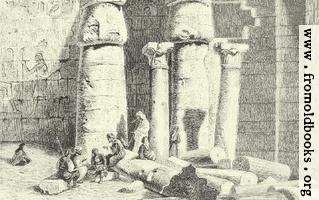 
An ancient ruined egyptian temple, used for a while as a Christian church, shown with workers (some barefoot) to give a sense of scale, and with barely-visible symbols and hieroglyphs in the background. [more...] [$]