Court with Remains of a Christian Church at Medinet Haboo.details 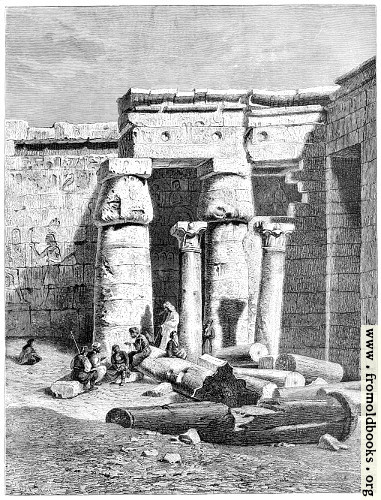 Court with Remains of a Christian Church at Medinet Haboo., in Egypt more

Court with Remains of a Christian Church at Medinet Haboo.

Among all temples on the western shore of the Nile, that of Medinet Haboo is distinguished by the grandeur and originality of its plan and the excellent preservation of its iportant parts. It was Rameses III. who erected this noble structure close to a small temple built by Thotmes III. (1. in the plan) in the south of the Nekropolis. Under the Ptolemies and the Romans this was enlarged with much magnificence; and after the doctrines of Christianity had dethroned the old gods of Egypt, a Christian congregation established itself in its halls, and built a church in its courts. (p. 286)

The engraving is signed J. Walla Münch, but I found no record of an artist by that name.

There is also a widescreen wallpaper version of part of this image.