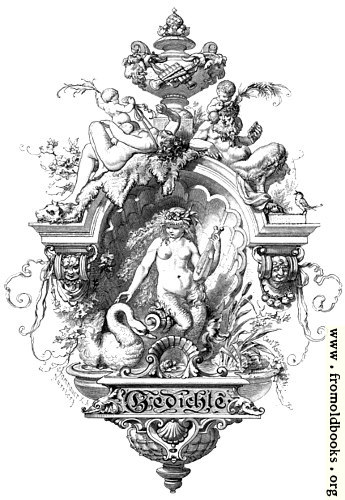 This full-page engraving is in the form of a three-dimensional sculpture: a mermaid sits in an alcove playing a musical instrument and petting a swan; she has a crown of flowers and long flowing hair. The alcove is surmounted by goat-heads and musical pipes (and a pineapple); above, to the left and right, cherubs or putti measure a naked woman and a male satyr, respectively, presumably to sculpt them. The woman is lying on a rug made from a wild animal, perhaps a boar; a bird sings at the satyr. Beneath the whole sculpture is is a scallop shell. The word “Gedichte” appears under the mermaid; it is a German word meaning Poetry.

The work is signed on the left, Trambauer X. A Nüreberg, and on the right, Carl Hammer, so this engraving was probably made by Trambauer after a panting by Hammer. In the popular mythology of the time, women were often transformed into mermaids and the young men whom they loved would become swans, so this is probably meant to illustrate a tragic scene, even if I am not sure that Goethe described it exactly.

There is also a version of this image with a blank space for you to write your own word instead of “Gedichte” here.