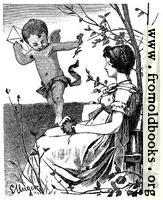 
A cherub carries a rose and a love-letter to a seated girl in this romantic engraving; it illustrated a poem, and was originally a decorative initial letter I; in this version I removed the letter and extended the tree-branches into the space. [more...] [$]

Decorative initial “A” with girl and roses 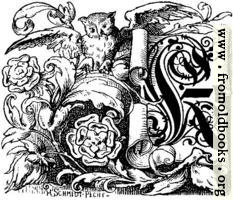 Decorative initial “K” on scroll with owl and roses


This ornamental letter “K” was used as an 8-line drop cap initial. It featuers an owl, two rose flowers, leaves, and a German Fraktur letter “K” on a scroll. [more...] [$] 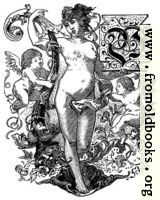 
A decorative Fraktur (German) initial letter “V” in which a naked woman with flowers in herhair is kept modest by a cherub waving some cloth; another cherub clings [...] [more...] [$] 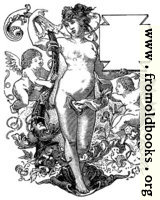 Romantic Woman with Cherubs and Cartouche


A blank cartouche or frame for a sign is placed on this image so you could use it as a decorative initital or drop cap; a woman is surrounded by signs of love. It is a version of this decorative letter V but without the “V” on it. [more...] [$] 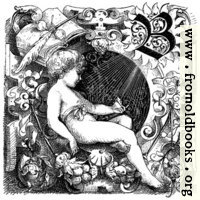 Decorative initial letter “B” with boy and book


This decorative initial letter B was used as a drop cap alongside a poem. It features an open book with a quill pen, old-fashioned spectacles scrollwork, roses, fruit, a styilized su with rays shoning down upon an almost-naked boy with [...] [more...] [$]


This chapter-head contains items and design reminiscent of Persia; it was used over a poem about the lyre. The frame originally contained the name of the poem; its shape is very [...] [more...] [$]


This elaborate initial letter “h” was used as an 18-line drop cap, or as a left border with an embedded initial. I have coloured the h red (or pink) to make it clearer. [more...] [$] 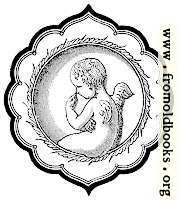 
An engraved drawing showing a cherub seated in a window frame that’s roughly circular but made of pointed arcs in a style reminiscent of Islamic, Moorish, Persian, Middle Eastern art and design. A cherub is a winged naked boy [...] [more...] [$]


This full-page engraving is in the form of a three-dimensional sculpture: a mermaid sits in an alcove playing a musical instrument and petting a swan; she has a crown of flowers and long flowing hair. The alcove is surmounted by goat-heads and musical pipes (and a [...]putti measure a naked woman and a male satyr, respectively, presumably to sculpt them. The woman is lying on a rug made from a wild animal, perhaps a boar; a bird sings at the satyr. Beneath the whole sculpture is is a scallop shell. The word “Gedichte” appears under the mermaid; it is a German word meaning Poetry. [more...] [$]


A version of the Muse of poetry sculpture with theGerman writing removed. [$]