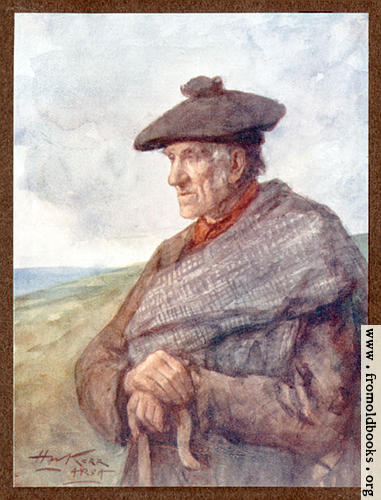 The Shepherd, in Scotland more

The shepherd here is an older man pictured outdoors wearing a traditional Scottish costume and leaning on his wooden crook.

“A friend has informed me that the late Lord Rutherfurd often told with much interest of a rebuke which he received from a shepherd, near Bonaly, amongst the Pentlands. He had entered into conversation with him, and was complaining bitterly of the weather, which prevented him enjoying his visit to the country, and said hastily and unguardedly, “What a d——d mist!” and then expressed his wonder how or for what purpose there should have been such a thing created as east wind. The shepherd, a tall, grim figure, turned sharp round upon him. “What ails ye at the mist, sir? It weets the sod, it slockens the yowes, and”—adding with much solemnity—“it’s God’s wull;” and turned away with lofty indignation. Lord Rutherfurd used to repeat this with much candour as a fine specimen of a rebuke from a sincere and simple mind.

There was something very striking in the homely, quaint, and severe expressions on religious subjects which marked the old-fashioned piety of persons shadowed forth in Sir Walter Scott’s Davie Deans. We may add to the rebuke of the Shepherd of Bonaly, of [Lord] Rutherfurd’s remark about the east wind, his answer to Lord Cockburn, the proprietor of Bonaly. He was sitting on the hillside with the shepherd, and observing the sheep reposing in the coldest situation, he observed to him, “John, if I were a sheep, I would lie on the other side of the hill.’ The shepherd answered, “Ay, my lord, but if ye had been a sheep ye would hae had mair sense.

Of such men as this shepherd were formed the elders—a class of men who were marked by strong features of character, and who, in former times, bore a distinguished part in all church matters. (p. 29)