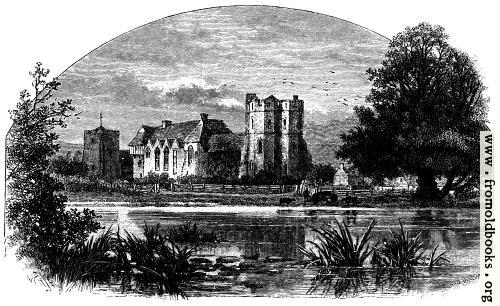 Shropshire is one of the most picturesque, as it is one of the most interesting, of English counties, possessing an interest of its own, as being the border-land between England and Wales, and associated with all the scenes of their unequal contest. It owes its picturesqueness and its historical interest to the same causes; it is the district where the Welsh mountains die away gradually into the broad valley of the Severn. It was early decided that the lands which lay eastward of the Severn should be English; it was long a matter of dispute how much of the hilly district which stretched westward should count as English soil.” (p. 165)

Stokesay castle is indeed picturesque, and is featured in a lot of the books here. See the location link for more pictures.

Edward Whymper is the name of an English wood engraver, and I am guessing that’s who engraved this picture. On the bottom left it’s also signed “W.H. Jr.” which may have been the painter.