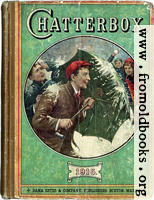 
The front cover of the 1916 Chatterbox annual features a picture of a crafty boy using an umbrella to shield himself from snowballs thrown at him by other children. There is also a higher resolution (enlarged) version of the snowball fight. [more...] [$] 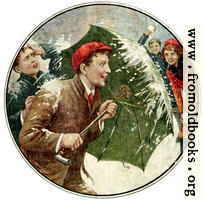 
This illustration, taken from the front cover of the 1916 Chatterbox annual, features a picture of a crafty boy using an umbrella to shield himself from snowballs thrown at him by other children. [more...] [$]


The ornate title page from the 1916 Chatterbox annual. There are pictures of a girl with straw on her head, a group of children reading, or perhaps singing, to a lady I take to be their teacher; a boy climbing tree; acorns, flowers and leaves. [...]group of singing children. [more...] [$] 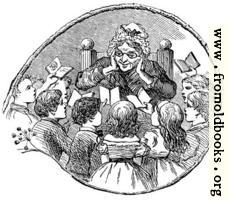 Children with their teacher


A group of boys and girls surround a grown-up woman, perhaps their grandmother or perhaps their teacher, or perhaps both. The children are holding books; perhaps it is a [...] [more...] [$] 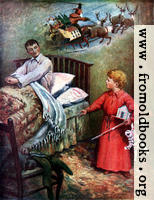 Frontispiece: Too Old for a Stocking


The frontispiece to the Chatterbox 1916 Annual shows a boy sitting in bed, wearing striped pyjamas, looking at another younger boy in his dressing-gown and slippers who has entered the bedroom carrying some toys. In the background flies Santa with four reindeers and a pile of toys. Note that this is a [...] [more...] [$]


Another old street is Mermaid Street, with its famous inn of that name and its beautiful timbered hospital [more...] [$]


[in the Middle Ages] There were three strong gates, and on the south side, looking out across the sea, was a large stone watch-tower, known as the Ypres Tower (pronounced locally ‘Wipers’). It was built [...]Stephen. Te small garrison kept a close look-out for the enemy’s fleet, and when it was seen to be approaching the warden gave orders that the watch-bell, that stood close by, should be rung to alarm the inhabitants and to call them to prepare for defence. (p. 124) [more...] [$] 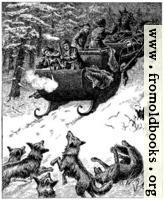 They knelt on the seat, and fired deliberately


It’s winter, and the horses are pulling the sleigh over the snow and through the forest, with wolves in hot pursuit. The young people (teens?) in the back are firing their rifles at the wolves. [more...] [$] 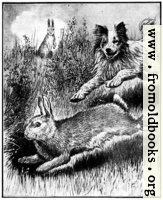 Panting was his heart with fright


A dog is leaping in chase after a rabbit; another rabbit looks on nervously in the background. [more...] [$]