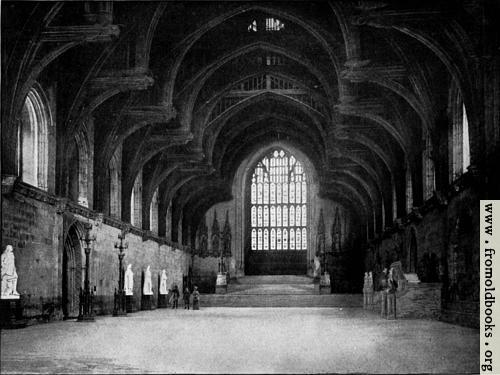 Westminster Hall, built [...] by [William] Rufus, and rebuilt by Richard II., is one of the largest chambers in the world, its fine timbered roof unsupported by pillars.

Innumerable are its historic associations. Here Charles I. was tried, the banners taken from him at Naseby hanging over his head; here “he confronted the High Court of Justice with the placid courage which has half redeemed his fame.”

Many tragedies besides Charles Stuart’s have these venerable walls looked down upon. Here Sir William Wallace, most gallant of patriots, was condemned to death in 1305; here Sir Thomas More was sentenced, his son flinging himself upon him and begging to share his fate. Here Fisher, Bishop of Rochester, the scheming Protector Somerset, and Robert Devereux, Earl of Essex, were condemned to the block; here the Seven Bishops were tried and acquitted; here the Gunpowder Plot consiprators were sentenced; and here the Scottish Jacobites, “the pride of the North,” were condemned in 1716.

Other associations Westminster Hall has, too, of a brighter kind, for here all the Coronation banquets were held, with pomp, pageant, and strange ceremonies, from William Rufus to George IV. Here, too, Cromwell was saluted with joy as Lord Protector; and here, some eight years afterwards, his exhumed head was exposed on one of the pinnacles. The last public ceremony in the Hall, a ceremony unique in its annals, was the two days’ lying-in-state of Mr. Gladstone, in May, 1898.” (p. 155)

I have marked Westminster as being part of [Greater] London, but it is an entirely distinct city from that of London.